A woman trained a camera on her boyfriend as he succumbed to multiple wounds after being shot by a cop.

Philando Castile was driving with Lavish Reynolds in Falcon Heights, Minnesota Wednesday when his car was pulled over ... she says for a broken taillight.

The video starts just after the shooting, but according to Reynolds, the officer asked Castile for his license and registration. She says Castile told the cop he had a pistol on him that was registered, and when he reached for his wallet the officer warned him to stop. Reynolds says Castile actually put his hands back up, but the cop shot him 4 or 5 times.

Castile died after being taken to a local hospital.

The cop says on video, "I told him not to reach for it. I told him to get his hand out."

An official investigation has been launched. 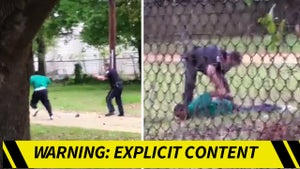