We got Lundgren in Hollywood this weekend and asked him a question people have wanted to know since "Creed" hit it big at the box office.

How would a kid Drago do against Michael B. Jordan's Adonis Creed?

Check out the clip -- Lungdren thinks the new brawl would be a remix of the old one ... saying lil' Drago would put Adonis Creed in a pine box.

Can anyone say "Creed II"? 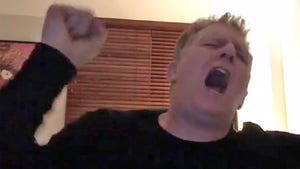