Vick's been under fire since he made controversial comments about Kap on FS1's "Speak for Yourself" earlier this week ... and the ex-NFL star says his original message was taken out of context.

"Obviously, we all know his afro has nothing to do with him being signed, and I wasn't trying to relay that message. It was just more so about helping him at the end of the day," Vick told the "Dan Patrick Show" on Thursday.

Vick says he's always been a Kaepernick supporter and is "truly sorry for what I said." 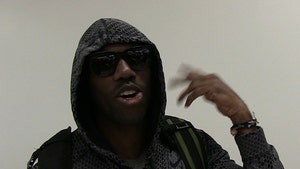