Justin Timberlake's been rehearsing his ass off for the Super Bowl LII halftime show, and TMZ has the first video ... which gives you a sneak peek of what's about to go down.

Sources inside rehearsal tell us JT did 4 run-throughs, just on Thursday. We're told one was a dress rehearsal that was taped for emergency ... just in case anything happens to JT and he can't perform.

This video is from one of his Thursday sessions, and one thing's for sure ... there's gonna be a TON of fireworks inside the U.S. Bank Stadium.

Our sources also reveal there are no 'NSYNC or Janet Jackson cameos planned ... so anyone hoping for a reunion or redemption ... you can pretty much abandon all hope.

HOWEVER, we're told Justin does have one pretty cool trick up his sleeve -- a hologram to honor ... wait for it ... Prince, in his hometown.

Of course, plans and strategies can change ... but an overhaul at this point seems unlikely.

Our source says the Prince appearance will involve video projected on a sheet behind JT ... and not so much a hologram. So, it won't be all that high-tech, but we're told it will still be pretty moving. 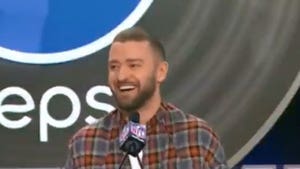