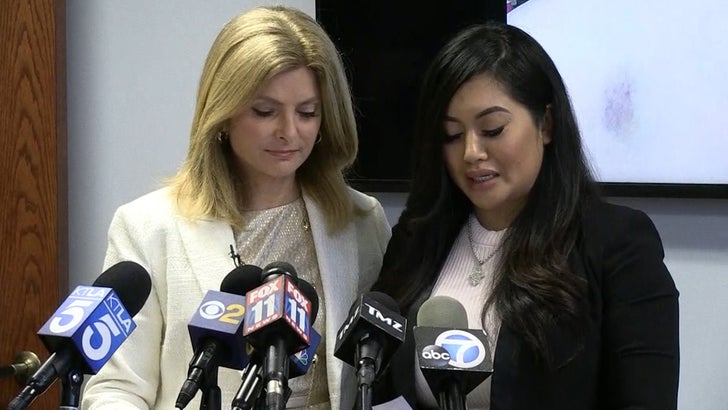 The woman accusing Trey Songz of beating her senseless alleged the singer hit her so hard he gave her a concussion and she vomited ... and she wants an apology.

The woman, named Andrea Buera, gave a tearful news conference Tuesday flanked by her attorney, Lisa Bloom, and spoke publicly for the first time and in more detail about the alleged incident she claims went down over NBA All-Star Weekend in L.A.

Andrea -- who said she's known Trey for about 3 years -- said there were others who stood and watched as Trey allegedly beat her to the point he gave her a concussion. She wants those witnesses to come forward, and she wants an apology from Trey.

Bloom said an investigator allegedly hired by Trey has also gone after Andrea's family and she wants that to stop. Bloom added they've not filed a civil suit but it is possible.

We broke the story ... Trey and the woman were at a Hollywood Hills party when the singer allegedly struck her in the face repeatedly because she was talking to another man.

The woman -- who hired Bloom and went to court to get a restraining order against Trey -- claims he hit her with such force it was as if 2 men were fighting. She also claimed he choked her and threw 2 of her cell phones down a hill when she tried calling an Uber.

She filed a police report and went to the hospital. Cops are now investigating. Trey's attorney, Shawn Holley, said there were witnesses present at the party who dispute the woman's account.