There were intense protests Thursday night on the Hollywood Walk of Fame ... specifically next to Donald Trump's star.

The battle was drawn early ... Trump supporters on one side, opponents on the other. Singer/songwriter Joy Villa, a Trump supporter -- who wore a pro-life dress with a fetus emblazoned on it to the Grammys -- sang the national anthem.

Two protesters then squared off -- arguing over use of the n-word and that's what triggered the brawl.

You see one protester kick another squarely in the head as he's on the ground.

Miraculously, no one got arrested.

Earlier this week another anti-Trump protester took a pickax to the star, obliterating it. The Hollywood Chamber of Commerce replaced it, but Thursday night it was covered in plywood. 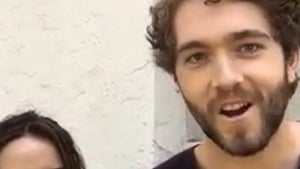 Donald Trump Star Vandal Explains Why He Did It, Says Robert De Niro Supports Him 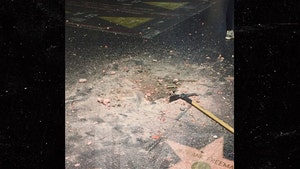 Donald Trump You Might Want to Rethink Fights Politix Exclusive