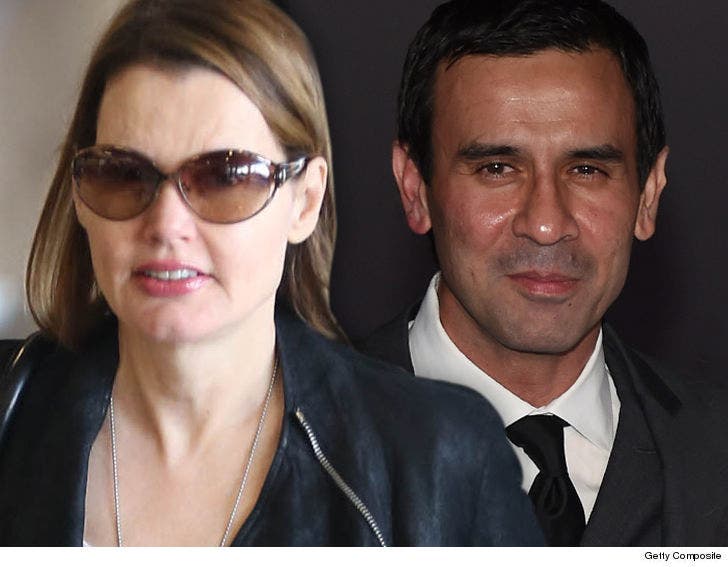 10:30 AM PT -- We now have the legal docs Geena filed, and she says she and Dr. Jarrahy made the intentional decision not to file for a marriage license, though she doesn't say why. She says, as a result, the marriage never occurred. She says on the day of the marriage ceremony they knew full well it wasn't a legally binding marriage.

She says throughout their relationship they filed tax returns either as "single" or "head of household."

Geena also says they always kept separate bank accounts, separate credit cards and never owned any real property as husband and wife. She says in 2012 he submitted an application for a home loan in which he says, "I filed my 2009 tax returns as a single individual because I am not currently married. Miss Davis and I cohabitate and co-parent our 3 children but are not officially wed."

9:15 AM PT -- Geena's lawyer, Peter Lauzon, tells TMZ he and his client take issue with the source connected to Dr. Jarrahy calling their kids "illegitimate." Lauzon says it's an arcane term that has no place in modern society.

Geena Davis has just filed a shocking legal document in her divorce case. She's asking the judge to dismiss her husband's divorce petition, because she says they were NEVER legally married.

Geena's husband, Dr. Reza Jarrahy, filed for divorce last May in an attempt to end their 17-year marriage. In the new docs, Geena claims there was a fatal problem back in 2001 when they had their marriage ceremony in New York. She says the marriage license was never properly returned to the court clerk, and she says under New York law that means they did not legally tie the knot.

The upshot ... Geena claims if there was no marriage, there's no property to split ... what's his is his, and what's hers is hers. What's more, Dr. Jarrahy would not be entitled to spousal support, 'cause he's not a spouse. In his divorce petition, Dr. Jarrahy asked for spousal support.

We're told Dr. Jarrahy doesn't see it Geena's way ... he believes the marriage was valid from the get-go, regardless of any irregularity with the license. We're told the doctor believes the ceremony and the fact he and Geena held themselves as husband and wife for all these years makes the marriage legal.

A source connected to the doctor tells TMZ, it's especially upsetting because Geena's request, if granted, would make their 3 kids "illegitimate."