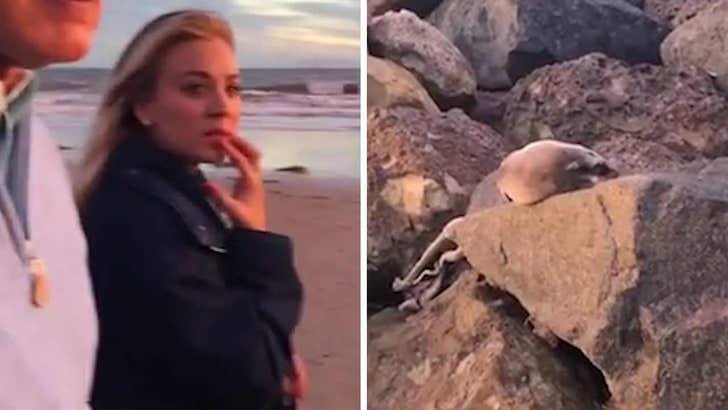 7:33 PM -- GOOD NEWS!!! The Channel Islands Marine & Wildlife Institute has rescued the baby sea lion and it's being dubbed #99 because it's the 99th seal the org has saved this year. We're told volunteers found the pup had turned up at Mussel Shoals, which is about 7 miles south from where it had originally been spotted by Kaley & Co. on Thanksgiving Day.

We're told the male pup is very underweight ... at just 26 pounds. The good folks at CIMWI will provide medical care for the pup and rehab will last for a few months before the pup can fend for itself. Awesome!!!

1:33 PM ﻿PT -- Kaley just took to Instagram and said her husband, Karl, went looking for the pup up and down the beach and they did not see it. She added that she assumes the pup is OK and might have gone back into the ocean since the tide was close to the rocks where the pup was stranded.

10:14 AM PT -- The Channel Islands Marine & Wildlife Institute, whose volunteers showed up to the beach to offer help, tells TMZ ... "unfortunately, we were not able to attempt a rescue effort [Thursday night] because it would not have been safe due to the animal's location on the rocks and the sun setting." A rep for the org also tells us people at the beach last night said they would check on the animal Friday morning and call the hotline if a rescue attempt was needed but it has not received any phone calls. The org added that volunteers are at the ready to respond if the pup shows up again.

Kaley Cuoco did a good deed on Thanksgiving ... an unexpected one as she strolled the beach and spotted a baby sea lion in a desperate state.

Kaley was spending the first Thanksgiving with her in-laws in the Santa Barbara area when she saw the animal on a rock, clearly in distress.

Kaley and hubby, Karl Cook, called a 24-hour marine and wildlife hotline and asked for help in rescuing the sea lion.

While they waited, a bunch of volunteers came to lend assistance. Everyone stayed, trying to help.

The sea lion's condition is unknown. We'll update when we find out. 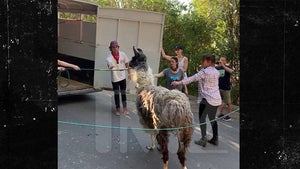 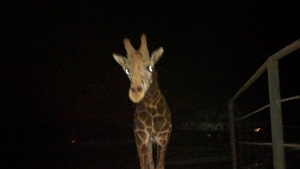 Stanley the Giraffe is Doing Fine, But PETA Furious at Malibu Wine Safaris