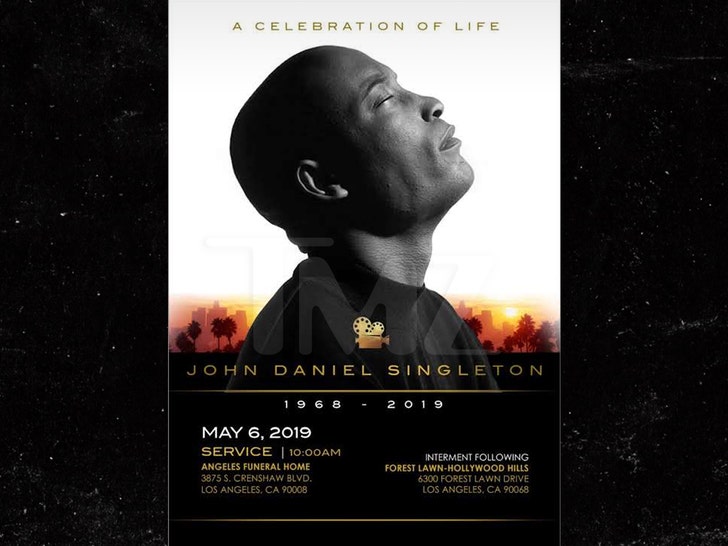 6:21 PM PT -- A source close to the family tells TMZ, Monday's funeral will be extremely intimate and closed off to the public ... a larger event will be held later this month, but those details are still being worked out.

John Singleton will be laid to rest at the cemetery where Nipsey Hussle was buried.

TMZ has obtained the invitation to celebrate the life of John Daniel Singleton. The service will be held at 10 AM Monday at Angelus Funeral Home in South L.A. It's the same place where Nipsey's family came for the viewing and private service.

After the funeral, John will be interred at Forest Lawn-Hollywood Hills. Again, it's the same place where Nipsey was buried.

As for the connection, we're told Nipsey and John knew each other, but the deeper connection is that they were both raised and active in South L.A. John's office was fairly close to Nipsey's store, The Marathon Clothing.

TMZ broke the story ... John's will was filed in Los Angeles Friday. His oldest daughter, 26-year-old Justice, will get his estate which is valued at $3.8 million. The will was drafted in 1993, before his 6 other children were born. They could have a claim to split the assets 7 ways.

John, who died of a stroke last month at 51, could also have a trust outside the will. His estate was reportedly valued at around $35 million, so the will may not be a full accounting of the assets John left behind.