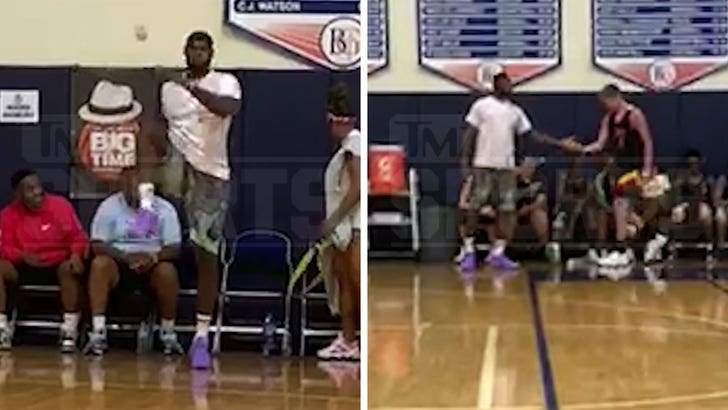 LeBron James is living vicariously though his son's AAU team -- dancing up a storm when they score a bucket ... and low-key willing them to victory from the bench.

The King was in Vegas Saturday for a basketball tournament that Bronny Jr. and his Blue Chips teammates are competing in right now -- and killing in, BTW -- where he was wearing his dad hat and coach hat at the same time, dishing out pep talks from the sideline.

In this video -- obtained by TMZ Sports -- you can see Bron Bron high fiving the coaching staff and fellow players as they played against the New York New Heights Youth team, which was coming in hot at 5-0 ahead of Saturday's game. The Blue Chips were coming in undefeated as well (reportedly 4-0), although it's unclear if this was a final or not.

Either way, LeBron was definitely treating it like an important match, coaching up his boy before tipoff, and giving suggestions to players on the court as they D'd up against NHY.

At one point ... Bron even did a high-knee celebration dance after we're told his team made a huge dunk on the other end of the court.

Looks like the cheerleading paid off ... we're told the Blue Chips beat the New Heights 60 to 47 Saturday, with Bronny Jr.'s stat line at 10 points, 8 rebounds and 5 assists.

Not bad for the heir to the throne!!! Feels like he and the Blue Chips might be due for another championship.