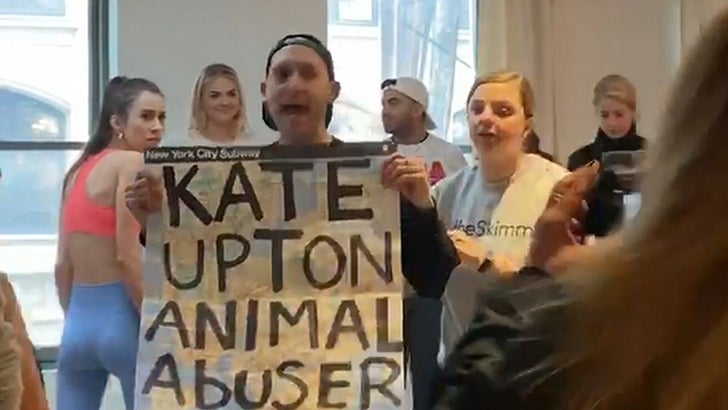 Kate Upton was confronted by an angry group of animal rights activists ... one of which had some nasty words about her partnership with a clothing company.

The supermodel was hosting one of her Strong4Me Fitness classes in NYC Wednesday when the protesters barged in ... led by a very loud man in a "VEGAN" hat.

Kate didn't look too shaken by their uninvited entrance, but things took an extra dark turn when the guy screamed at her ... "Coyotes get shot in the head, and are strangled to death!"

The protesters were up in arms over Upton's promotion of Canada Goose, a winter clothing company that uses coyote fur and goose down to make its coats.

Obviously, that doesn't sit well with animal rights groups, though the company insists that it sources its animal products humanely.

Kate's not the first to be confronted by aggressive animal rights activists chanting about having "blood on her hands" and being a murderer ... it's happened to Jennifer Lopez, Lil' Kim and Chrissy Tiegen too, all in 2019.