Quality Control Music's CEO Pierre "Pee" Thomas is threatening and unpredictable, even when he's in a courtroom ... so claims his baby mama, Lira Galore, who wants a judge to keep him away from her.

Lira filed docs seeking a temporary protective order against Pee because of what she calls his "menacing behavior" last week during a court hearing in their custody battle for 9-month-old, Khaleesi.

As you'll recall ... Galore accused Thomas of violent abuse last month, claiming he beat her during her first 8 months of pregnancy with his child. She's seeking at least $15 million for her injuries.

Lira says in new docs that because of the past alleged violence, she's terrified of Pee ... and says his antics in court only intensified her fear. She claims Thomas kept trying to speak to her, including approaching her in an "intimidating nature" and attempted to get her phone number.

She claims while they were sitting across from each other in a conference room, he kept glaring at her and made her extremely uncomfortable ... and she says he got caught taking pictures of her as well.

Lira says when she and her lawyer tried to leave the room, Pee blocked the doorway and harassed her. She says they had to get a deputy to escort her out of the building.

Galore claims the ordeal was traumatic for her and says even her lawyer "for the first time in her legal career, felt unsafe in the courtroom." She's asking for a court order to keep Pee 100 yards away and to not have any contact with her.

As we've reported ... they've been going back and forth with allegations since Lira filed a counterclaim in December in the custody case Pee filed back in May, in which he requested joint custody of their child.

Pee denies he's been abusive and has called Lira's claims a "15 million dollar shake down." 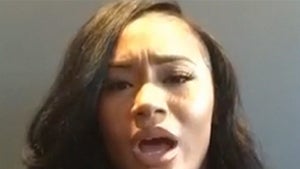