3:47 PM PT -- Gotti's team tells us they will be refiling for the restraining order later today.

2:19 PM PT -- It's back to the drawing board for Yo Gotti and the inmates he's trying to protect. A federal judge shot down the request for emergency restraining order, but did leave them a glimmer of hope.

In her ruling, the judge said the inmates and their attorney need to cite a precedent for a federal judge intervening to appoint a special monitor in a state prison. Judge Debra Brown gave them 36 hours to refile the request.

The State of Mississippi is doing nothing to prevent inmates from dying under hellish conditions, according to Yo Gotti ... who's sounding alarms in federal court.

As we've reported, the rapper's been outraged by what's going on at Parchman State Penitentiary and got Team Roc involved in a legal battle to improve conditions. Their latest move is filing for an emergency restraining order, on behalf of more than 25 inmates.

According to the docs, 8 people in the prison have died in the last 26 days -- and it's no wonder when you hear what's allegedly going on behind Parchman's walls. In the filing, they say there's just ONE guard for 160 inmates, in a particular cell block. Even worse, inmates throughout the prison are allegedly being served cold, rotten food containing rocks, insects, and bird and rat droppings -- and toilets are spilling out onto floors. They also claim Parchman's drinking water is contaminated with human waste.

The biggest issue with the grossly understaffed cell block -- in docs, they claim the limited number of guards "can't, or won't, enter Unit 29 buildings to prevent violence or even render much needed emergency medical assistance." Prisoners have resorted to setting fires just to get the attention of guards.

Widespread prison riots have been reported all month at Parchman.

The emergency order seeks to have the court appoint an independent monitor to assume control of Parchman's day-to-day operations, and do whatever is necessary to make the prison livable. They say the current situation is unconstitutional as the 8th Amendment -- barring cruel and unusual punishment -- is clearly being violated.

Gotti tells us, “The situation at Parchman is a lethal humanitarian crisis. Our fellow humans are being held in facilities with little to no food, no clean water, no electricity, no heat, no blankets and in cells where the floors are full of roaches, rats, black mold and feces."

Watch Mississippi Gov Tate Reeves blame the murders and deaths at Parchman on inmates with cellphones. Had it not been for inmates with phones, no one would know the conditions of the prison. They would literally die in the dark w/o them. #ShutDownParchman #ParchmanPrison pic.twitter.com/JcmgU1HD0n

Interestingly, Mississippi Gov. Tate Reeves held a news conference Thursday where he claimed all the violence was the result of inmates having illegal cell phones.

Gotti and many others aren't buying that. The Memphis rapper added, "There are inmates who haven't been able to shower for over a month. The incarcerated are human beings who deserve safe, healthy and humane living conditions - not torturous, deadly treatment. We won't stop until the Mississippi government makes sweeping changes to guarantee the safety of inmates." 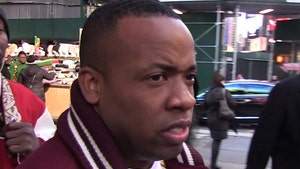