H.S. hockey players in Illinois turned themselves into human missiles over the weekend, launching their bodies at each other in a wild brawl ... and footage of the fight is insane.

Evanston's varsity squad was facing off with Lake Forest on Saturday at a local college rink in the Chicago area ... when a fight broke out and escalated IN A HURRY.

You can see in the video ... there's pushing and shoving. At one point, a Lake Forest player LAUNCHED himself into an Evanston player ... who crashed head first into the boards.

Later in the fight, ANOTHER Lake Forest player did the same thing ... violently throwing his body at the pile and sending two Evanston players crashing to the ice.

In another angle of the scrap ... you can see the massive magnitude of the brawl -- with haymakers, wrestling and pulling going down all over the rink.

This is just a full-fledged war on ice @spittinchiclets (via ig:cmarks32) pic.twitter.com/yWRgvRxRoe

Eventually, order was restored ... but it's unclear if any injuries were suffered. It's also unclear what started the melee. We reached out to reps from both programs, but so far, no word back yet.

"It exemplifies bad behavior that is not indicative of our club. It was an unfortunate end to the last game of the season, so it's best to leave it behind. Thanks for your compliance." 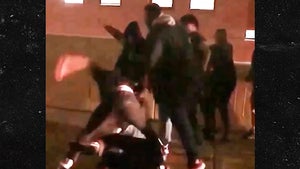 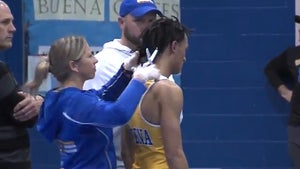