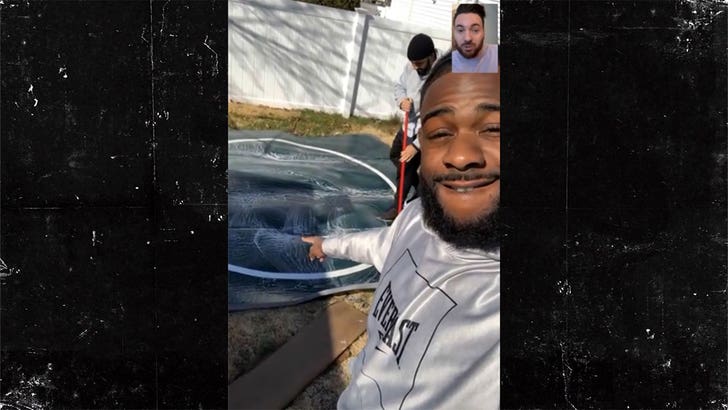 UFC star Aljamain Sterling -- the #2 ranked bantamweight in the world -- says he's sick and tired of shadowboxing during quarantine ... so he's turning his house into an MMA gym!

It's actually pretty dope ... Funk Master has a bunch of handy roommates and they're all teaming up to renovate their Long Island pad into a prime training center.

The 30-year-old busted out (and disinfected) a bunch of old mats and equipment -- and even installed insulation in the walls -- so they can get back to doing what they love to do ... fighting.

Sterling also wants to set the record straight about rumors he accepted a fight with Cory Sandhagen in May -- saying it's absolutely NOT TRUE.

Alja says it all has to do with his limited training resources. In other words, he wants to make sure he's in the absolute best shape to fight a tough opponent like Cory ... and with the pandemic in full swing, it limits his ability to level up.

"For me to take a fight against a guy ranked #4 in the world and not have the proper training is like a guy going to work doing construction without all of his tools. Like, how do you expect to get the job done?"

He added, "I would love to fight ... but right now's not the time. I want a proper training camp so I can really f**k somebody up."

"I didn't work this hard to become #2 in the world to just lose a stupid fight over ego and pride ... it's just stupid."