Two men may have some ice-cold drinks to thank for their survival, because they were rescued in the deep blue ocean after clinging to a styrofoam cooler.

It went down in the Gulf of Mexico. Adam Vetter says he was heading to shore in his boat at around 6:30 PM when he spotted 2 men in the ocean, clinging to the cooler. They were spotted 12 miles offshore from Hudson Beach, Florida.

Adam spotted a sinking boat, and then -- in the distance -- spotted the 2 men in the water, clinging for life and waving their hands wildly in the air.

The 2 men say they were holding on for dear life for nearly 4 hours. Adam and his crew pulled the 2 men up on their boat to safety.

This could have gone much worse. Adam and crew didn't spot the boat when it was in front of them ... they were 1 1/2 to 2 miles away from the sinking boat and the 2 men, but someone saw something and the 2 men are alive as a result. The fact the cooler was white helped, because it stood out in the water. 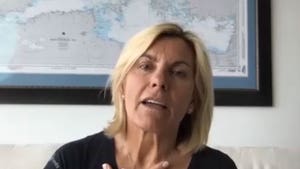