Yes, Dress for Less -- but also ... dress comfortably for long wait times at Ross, 'cause that's what hundreds of people are experiencing across the country as the company starts to reopen its doors.

Check out all these crazy scenes from different Ross discount stores nationwide -- from Louisiana to Indiana and probably lots of other locations in between. There are MASSIVE lines out the door that wrap around the building ... and in some cases, out into the parking lot.

Line for #Ross in Hammond IN pic.twitter.com/ovmDcGLjlv

As one FB user noted, there doesn't appear to be a special promotional giveaway or anything that Ross has announced lately. Other than the fact that these go-to retail haunts are just now starting to let customers back in, not much else has changed. So, what gives?

Well for one ... apparently some Rosses are having major sales upon reopening, which would explain the crowds. They're already pretty cheap, and a sale is like giving stuff away. Two -- and probably more to why the lines are so long -- is that Ross has pretty strict restrictions in place for getting in ... including a limited head count, and roadblocks.

I cannot believe this. pic.twitter.com/lBvFZoG1rs

Word on the ground is that Ross has implemented plexiglass all throughout the inside, and a lot of their aisles are one-way too. Oh, and don't forget social distancing ... Ross wants people to adhere to that when they're roaming their racks. So, in short, it takes forever now.

Ross started opening their stores back up pretty recently, this after they reported their latest sales figures ... which were awful. Welp, they got business back and then some. 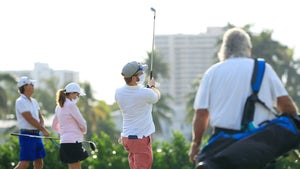 Florida Golfers Flock To Courses After Reopening, Masks On!