George Floyd's hometown is honoring him, and joining the national cries for justice by staging a large, peaceful march rally and March on the streets of Houston.

H-town rappers Bun B and Trae tha Truth joined throngs of people flooding Downtown Houston Tuesday for a march that ended at City Hall. George spent most of his life in Houston and still has family there. He hailed from the Third Ward and was an active member of the rap scene there.

Ben Crump, attorney for Floyd's family, announced earlier Tuesday the first memorial service will be Thursday from 1 to 3 PM in Minneapolis with another one scheduled in North Carolina Saturday at 3 PM.

Later, there will be a public viewing in Houston from 12 to 6 PM before he's buried there. Presidential candidate Joe Biden's expected to attend the funeral.

Bun B shortly before the #GeorgeFloyd March pic.twitter.com/KHjs1hxNIF

Bun B told a local reporter he was marching because George "was a human being and wasn't treated like one." Former classmates of Floyd from nearby Jack Yates HS also held a vigil over the weekend. People attending the vigil wore school colors and shirts that read, "I can't breathe."

Tuesday's protests also included an urban trail riding club dubbed Nonstop Riders. A reporter there got video of them showing up to the protest and they were met with boisterous applause. One of the riders said, “We’re here representing for all our black brothers and sisters.”

Cheers rose up from the crowd as these dudes rolled up. Clip-clip-clip-clop. pic.twitter.com/x1h8UpmyQy

The protests in Houston come in the wake of Minnesota Gov. Tim Walz announcing the launch of a civil rights investigation ... which will not only look at the 4 officers involved in Floyd's fatal arrest, but also examine the department's behavior, in general, over the last decade. 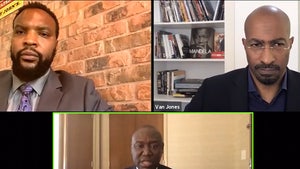