Toronto PD probably saved this jackass' life ... he showed up in blackface for a protest against racism -- seriously -- and yes, protesters were furious about the spectacle.

The wild moment was captured on video Saturday during a demonstration in the city's Nathan Phillips Square. The white guy walked into the crowd completely decked out in black makeup on his face and hands.

We can't imagine it took long for people to turn on him, and even as police whisked him away ... pissed off protesters were still screaming at him.

#BREAKING: Someone wearing black face paint shows up at anti-Black racism protest at Nathan Phillips Square and is escorted out of the area by police. #BlackLivesMattertoronto pic.twitter.com/unfn9VwVzR

People were reportedly barking threats at him and calling for the police the whole time he was trying to wade through the rally. Eventually, bicycle officers did step in and escort the guy away -- almost completely surrounding him to keep the angry crowd off of him.

Cops say the agitator was arrested for breaching the peace -- yeah, he did that and then some. Oh, the beatdown he might have caught.

Disgustingly ugly display that could've been much uglier ... for him. 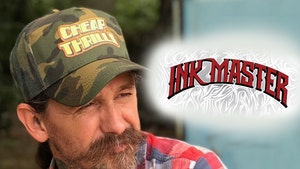