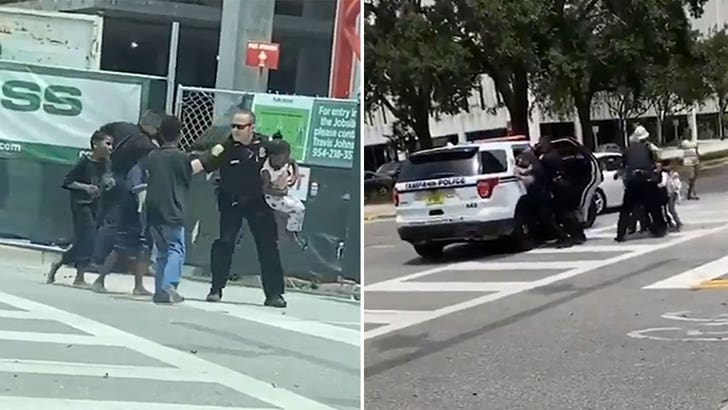 4:45 PM PT -- 6/29 -- Cops say they responded to a call of an abandoned car after a citizen attempted to offer assistance to the woman and her kids. Police claim the mother "reportedly became combative" with the good samaritan.

Police say "officers intervened when the mother attempted to walk on the interstate out of concern for the safety of her and her children."

In the end, cops say no one was arrested or injured during the incident.

Tampa cops responded to a call about a woman in distress who was walking in the street with her kids ... and it turned into a gutwrenching scene of the children being ripped away from their mom.

Police got the call of a woman "under severe mental distress." When they arrived in the downtown area, they saw her walking in the road with her 5 barefoot kids.

The way police handled the situation is raising lots of questions ... in particular, whether this was the way to handle and de-escalate the situation.

You see one cop holding the woman against a fence, while one of her daughters stands by her side. Then, another cop held the girl with one hand as he restrains 3 of her brothers who are trying to free their sister from the officer.

Police eventually took the woman to a hospital for a psychological evaluation. They also took the kids to the hospital so they could be near their mom.

This is yet another example of how important it is for police to assess non-violent situations and figure out ways of de-escalating without causing needless trauma, force or worse.