The world is constantly adapting to a new normal during the pandemic -- and that includes churchgoers and their leaders, who are pivoting too. As proof, here's Exhibit A and B.

We'll start with Archbishop Jose H. Gomez here, who presided over a mass this Sunday at the historic San Gabriel mission in Southern California -- this after a fire ravaged the main edifice Saturday, and parishioners were redirected to a separate chapel on the same campus.

Once the church service wrapped, the bishop and what looks to be a fellow priest were dishing out socially distant-friendly goodbyes to their worshipers ... giving 'em elbow bumps, waves and air crosses. One lady wanted a handshake, but got a blessing instead.

Inside the chapel, parishioners take communion to tune of “beautiful San Gabriel” pic.twitter.com/faFffxYzcw

Everyone seemed to be wearing masks, and per reports on the ground ... the number of people allowed inside capped out at 100, so folks were spread out fairly well in the pews.

Now, elsewhere in the Catholic world ... someone captured an innovating way one church went about doing their weekly collections. Usually, there's a person going around with a basket, which then gets passed around with people tossing in cash and donations.

With 'rona going around though, that ain't that safe obviously. So, instead, one parish got creative to get their dough ... strapping a basket to a remote control car and zipping out to the crowd, some of whom threw down some bucks and carried on like normal.

Making due regardless of the circumstances around us. Can we get an amen? 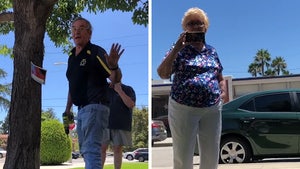 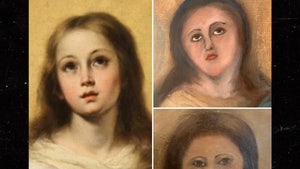