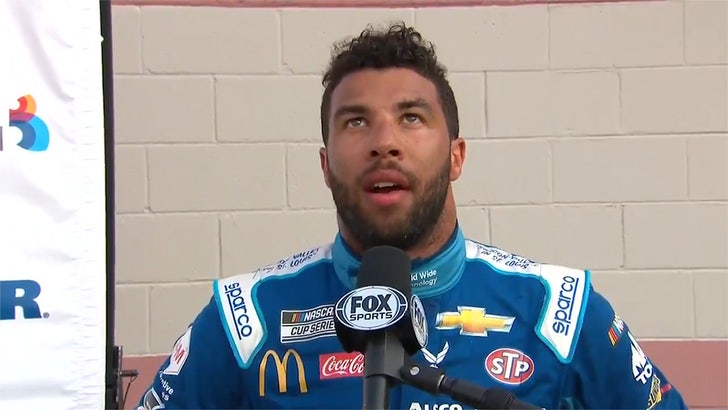 Bubba Wallace was NOT a happy camper after crashing out of a race Wednesday ... the NASCAR star went OFF on fellow driver Michael McDowell after he says the guy purposely wrecked him.

Here's the deal ... Bubba had been gunning for weeks to get a spot in NASCAR's All-Star Race at Bristol Motor Speedway in Tennessee on Wednesday night.

But, since Bubba hadn't won in 2019 or 2020 ... his only options left for a spot were to win one of the stages in Wednesday afternoon's All-Star Open qualifying race or earn the fan vote.

Bubba, though, was not able to do any of the above ... because the 26-year-old crashed his car into a wall just 17 laps into the Open.

Check out footage of the wreck ... it's clear as day, McDowell pushed his car's nose into Bubba's rear end, causing the guy to spin out and hit the wall.

Afterward, Wallace was FURIOUS ... and blasted McDowell for the move.

"Just disrespect," Bubba said. "When you get hooked right rear into the wall, I don’t even need to see a replay. Look at that sh*t. Yeah, wow."

"People say he’s one of the nicest guys in the garage. I can’t wait for the God-fearing text that he is going to send me about preaching and praise and respect. What a joke he is.”

Bubba's railing against McDowell didn't stop there ... cameras appeared to catch Wallace leaving a piece of his wrecked car near McDowell's garage area as well.

.@BubbaWallace took the bumper of his wrecked #43 car and dropped it a the hauler door of @Mc_Driver.

Not a happy driver.

NASCAR says Bubba would have to have won one of the stages of the Open to get locked into the All-Star Race ... the league says Clint Bowyer ended up taking the fan vote despite Wallace leading for several days heading into this week.

While Wallace did not get a chance to race for $1 million in the All-Star event ... he's still expected to compete at this weekend's O'Reilly Auto Parts 500 in Texas.