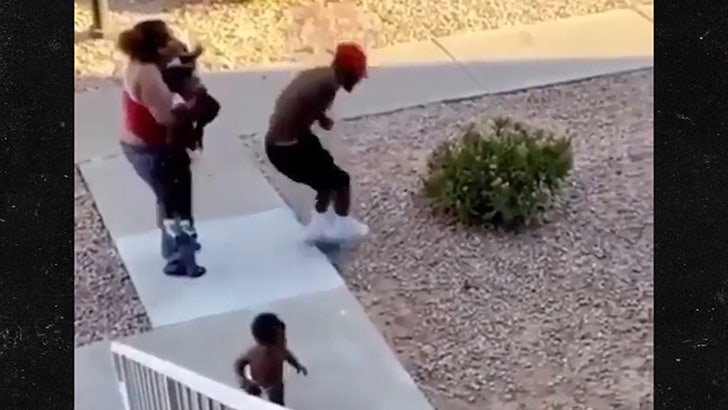 A black man with his arms up in the air was shot with bean bag rounds by cops, and then shot twice more as he lay on the ground.

It went down in Mesa, Arizona. Lorenzo Jones was arguing with his girlfriend and her sister, while 5 children watched nearby.

The video starts when the SWAT team is giving Jones commands. Jones was supposed to appear in court earlier in the day but failed to show, so an arrest warrant was issued. Jones tried telling the cops he had indeed shown up at the courthouse.

The cops gave orders for Jones to surrender, and when he put his hands up, one of the officers fired a bean bag round that squarely hit Jones, as he fell to the ground in pain.

As Jones lay on the ground, SWAT fired 2 more rounds, hitting him both times.

The Mesa Police Dept. is investigating, but there are signs the Police Chief thinks the force was warranted. Chief Ken Cost said, "They [the cops] felt that he was armed and dangerous." Thing is ... Jones was shot when he had his hands up in the air and when he was laying on the ground.

The Chief added, "Less-lethal tools are exactly that, less lethal, and were developed to prevent violent actions, protect the public, save the lives of suspects as well as officers."

Philly Bar Owner Pulls Gun on Man During Argument, Claims He was Threatened