"As much as I love Michael Jordan, like, dawg, man, LeBron James is the one, dawg. He the one, man."

Did Allen Iverson just pick LeBron James over Michael Jordan in the great G.O.A.T. debate? Sure seems that way.

But, it's not exactly crystal clear -- we'll explain.

A.I. was on Fat Joe's podcast this week ... when Joe asked Iverson about what music got him hyped before games -- and that's when the former Sixers superstar went on a tangent.

"As much as I love Michael Jordan, like, dawg, man, LeBron James is the one, dawg. He the one, man."

But, he then also showed some serious love to Kevin Durant, calling the Brooklyn Nets superstar "the one" as well.

Unclear if that meant A.I. was also putting Durant ahead of Jordan in the great NBA debate ... but Allen did say, "Kevin Durant is the one, man, The one."

Iverson also talked with Fat Joe about everything from his infamous step-over Tyronn Lue to some of his favorite players in the game today ... and the clip is pretty awesome!! 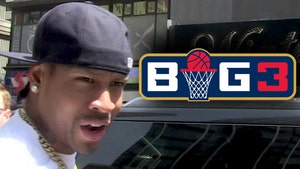 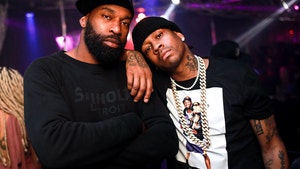