The wild black bear caught on camera taking a big ol' up-close whiff of a woman in a nature park has paid a dear price -- he's been captured and castrated.

The juvenile animal underwent the painful procedure after authorities deemed him a threat to visitors at the Chipinque Ecological Park in Mexico, where the bear was known for his close encounters with humans.

As we reported ... video last month showed the curious bear getting on its hind legs to sniff a woman's hair as she calmly took a selfie. The bear also put a paw on her and seemed to nuzzle her.

This girl has nerves of steel.

She actually took a selfie with the big guy... pic.twitter.com/I3Ezyn8q7G

Folks who live near the park reportedly call the animal "the friendly bear" ... and officials are coming under fire for their decision to capture and castrate the young bear, which weighs 212 pounds.

The black bear was captured by officials from Mexico's federal environmental protection agency while sleeping in someone's backyard. Not the best way to wake up from a nap.

The bear is being relocated from Nuevo León to a mountain range in Chihuahua ... but his family jewels won't be going with him. 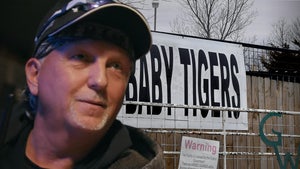