"Fixer Upper" is back -- but, before Chip Gaines can shout, "It's demolition day!" he and Joanna gotta hunt down the right projects ... and that's where you can help 'em.

The "Fixer Upper" reboot will be coming to the couple's new Magnolia Network in 2021, but in the meantime, they've put out a casting call for current homeowners in the Waco area looking for a stunning home renovation.

To be eligible, homeowners have to live within 30 miles of Waco ... though most hardcore fans of the show already know that. The new wrinkles include having at least a $50k remodel budget, handing over all design and renovation decisions to Chip and Joanna ... and be willing to vacate during the renovation.

They expect that to start later this fall.

It's interesting ... during the show's 5 successful seasons on HGTV, which last aired in April 2018, the Baylor football-loving couple usually trotted around town with their clients looking for a house they wanted to buy and renovate.

It looks like this time around ... they're considering "only homeowners who have closed on a home and/or currently living in their 'Fixer Upper.'"

The projects will last between 30 to 35 weeks, so anyone who gets picked will have to provide their own alternative housing. And, in case you've ever wondered ... the furniture used to stage the renovated home is available for purchase at a discounted rate after the big reveal.

All homeowners are expected to be picked by September 2020 ... so hit up casting@magnolia.com if ya wanna be considered. For those who just want to admire from afar ... catch it when the DIY Network becomes Magnolia Network in 2021. 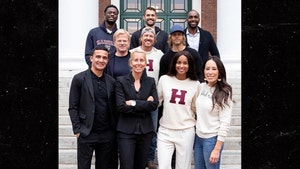