The man who plays "Bailey" -- the L.A. Kings lion mascot -- is being sued for allegedly sexually harassing a female "Ice crew" staffer, TMZ Sports has learned.

The woman behind the suit is using the alias Jane Doe to protect her identity -- but says she was hired for the Crew in 2018 to work fan events for the Kings and the Ontario Reign (the Kings' AHL affiliate).

But, things went south, according to the lawsuit, when Tim Smith -- the man who plays "Bailey" the mascot -- began routinely hurling sexually charged comments in her direction.

She claims Smith was not just a performer, but managed the Ice Crew and wields the power to hire and fire people.

Jane Doe claims she made it clear the advances and comments were unwanted -- but Smith retaliated against her by firing her from the Ice Crew.

Doe says a team official begged her to come back and promised to shield her from Smith -- acknowledging Smth's problematic conduct.

But, when she returned, Doe claims Smith was back to his old tricks ... and even describes an incident where he allegedly put his crotch in her face in the mascot locker room while making lewd comments and thrusting his hips.

Doe says she ran out of the room and later quit for good.

She's now suing Smith along with the Kings and AEG, which owns the hockey team. She's claiming sexual harassment, retaliation and more -- and demanding more than $1 million in damages.

We reached out to the Kings for comment -- so far, no word back. 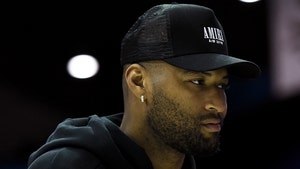