4:55 PM PT -- In a previous version of this story, a social media post stated the children were almost taken from the mother by local law enforcement for possible child endangerment and neglect.

They continue, "This family has endured a lot and it is fantastic that the community is willing and able to help."

A Taco Bell proved critical for two little girls who were briefly using its Wi-Fi for school -- something that sparked some true help from the community.

A photo of two young girls sitting outside of a Taco Bell in Salinas, CA -- just outside of Monterey -- recently went viral ... which shows them plopped down on the concrete with their laptops and notepads out, while two TB employees come out to talk to them. It's quite sad.

Two students sit outside a Taco Bell to use Wi-Fi so they can 'go to school' online.

This is California, home to Silicon Valley...but where the digital divide is as deep as ever.

Where 40% of all Latinos don't have internet access. This generation deserves better. pic.twitter.com/iJPXvcxsLQ

The photo prompted a two-pronged response -- one group was utterly outraged at the lack of resources these kids had, understanding this is the best they could do in a desperate situation. On the other hand, some folks were concerned ... thinking it was neglect.

On that first part, a handful of elected officials spoke out on the photo ... pointing out the digital divide among certain underrepresented communities. Salinas City Elementary School District copped to the fact the kids were their students and said they were already working to remedy the situation by providing them a hot spot with internet access.

The fam was allegedly about to be made homeless by their landlord because of renovations scheduled on their unit.

Fortunately, enough people in the community pulled resources together and put them up in a hotel for the time being while they get back on their feet. They've even started a GoFundMe for them too. 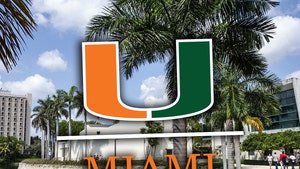 University of Miami Sued for Tuition Reimbursement by Student