Emmitt Smith says if he were still playing today, he'd take a knee for the national anthem ... saying he's been a victim of social injustice despite being an NFL legend.

The Dallas Cowboys all-time leading rusher spelled it all out in a lengthy interview with the Fort Worth Star-Telegram, saying he wishes he'd been more vocal about racial equality when he played in the '90s.

Emmitt didn't elaborate on the alleged racist incidents, but continued ... "I’m talking from experience, not something I read in a book and saw on CNN.”

Emmitt once famously took a knee at Texas Stadium in 2000 ... but it was to defend the Cowboys' midfield logo -- which had just been celebrated on by then-49ers star Terrell Owens.

The move cemented Smith as a Dallas icon ... and Emmitt says he wishes he had done the same thing when it came to protests during the anthem.

“Why not?" Smith said when asked if he'd kneel if he were playing today. "If I can defend the star, I definitely can defend the right for everybody to have equal justice."

Smith's son, EJ Smith -- a star H.S. football recruit who's set to play at Stanford whenever the Pac-12 kicks off again -- has already knelt for the anthem during his H.S. career, and Dad seems proud as hell of that.

In fact, Smith is advocating for more players to take knees ... and he's sending a strong message to Cowboys owner Jerry Jones to continue to let it happen.

Smith added, "What is the difference between injustice and bullying? You see somebody get bullied, are you supposed to keep walking down the street? No. You support that peace, but you won’t support justice for people getting killed in the streets for no apparent reason." 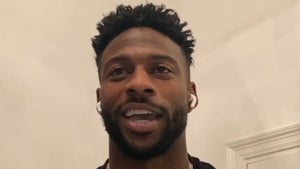