Former Dallas Cowboys 1st-round pick Marcus Spears is going after a current player over a tackle he thought was dirty as hell ... calling the play straight-up "bullsh*t."

Here's the deal ... in the 4th quarter of the Cowboys' game against Seattle on Sunday -- defensive lineman Trysten Hill made an ankle-grabbing stop on 'Hawks star Chris Carson.

After the play, the RB was down on the ground in pain holding his knee ... and when the replay aired -- it wasn't hard to see Hill twisting the guy's leg well after he was down.

Why is this dude trying to rip Carson's leg off after the play?? pic.twitter.com/N4bCEWgAMF

Spears saw the vid ... and went OFF on the Cowboys' starter -- saying, "This is a Code Breaker and Bullsh*t."

"There’s a Code that usually exists between players in the league as much as we wanna win."

There’s a Code that usually exist between players in the league as much as we wanna win. This is a Code Breaker and Bullshit . https://t.co/crpxpJZtFZ

Former NFL offensive lineman Geoff Schwartz added ... "This dude has some hurt coming his way next week for this gator roll. We see it on film."

Hill is expected to be fined by the league over the tackle ... NFL Network's Ian Rapoport reported Monday.

By the way, the Seahawks ended up getting revenge on Hill for the tackle on the scoreboard ... they ultimately won the game 38-31 -- putting the Cowboys at 1-2 to start the season. 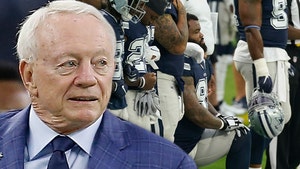