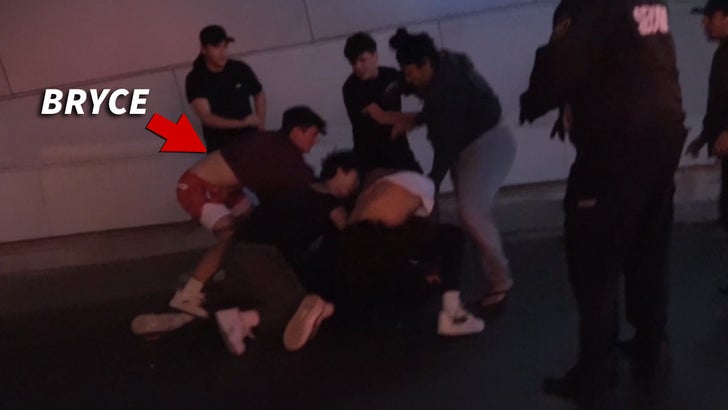 TikTok star Bryce Hall and some members of The Sway Boys ganged up on one dude and delivered a beat down so bad, cops were called ... but somehow they all made up in the end.

The violence broke out when Bryce and fellow Sway members Jordan Rodriguez, Josh Richards, Nick Bean and Jaden Hossler all got dragged into a scuffle with an unknown man outside of Mel's Diner on Sunset.

Video of the Sept. 23 brawl shows Bryce -- who had his power turned off after throwing a massive party during quarantine -- in the red shorts trying to break up the fight as is Jordan. We're told Josh and Jaden are the ones throwing punches in the video claiming self-defense after Nick got punched in the face. The brawl was the group's response to Nick getting socked.

You can also hear someone hurling homophobic slurs at least 3 times -- we're told that was Nick, who according to witnesses, seemed pretty drunk and out of control.

We're also being told what triggered this was Nick allegedly putting a cone under the car of the unknown man ... who then confronted the Sway Boys and all hell broke loose.

For his part, Bryce says, "We don't condone violence, but if you punch someone in front of us, we'll have no choice but to defend ourselves."

Cops ultimately showed up to the scene and talked to the guy who got beat up, but we're told no one involved wanted to press charges or cooperate.

Makes sense. At the end of the vid you see some of the Sway Boys shaking hands with the guy. No harm, no foul? 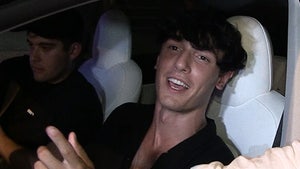 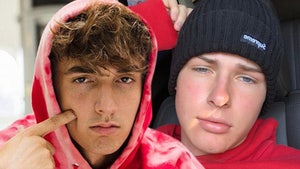