7:57 AM PT -- DeAndre Hopkins admits throwing the double bird at a caravan of Donald Trump supporters on Sunday ... but he says it's only because they were screwing with him in traffic.

The NFL star says he was just trying to get State Farm Stadium in Glendale, AZ. to play the Seahawks ... when he came upon the Trump train on the highway.

"I guess I got in between a train or a bunch of cars that I wasn't supposed to be in between," Hopkins said on the "All Things Covered Podcast" with Patrick Peterson and Bryant McFadden.

"I really was about to give the peace sign to them, but this finger was kinda hurting so it didn't make it up in time..."

You have to hear @DeAndreHopkins side of the story about what happened on the way to the game the other night...

"They were honking the horn at me to tell me to get out of their way -- and I didn't -- and the guy in front of me stepped on his brakes and tried to stop dead in traffic."

In other words, Hopkins says the Trump supporters were messing with traffic and he didn't appreciate it.

"I was going to do the peace sign to him but this finger here [index finger] was kind of hurting so it didn't make it up in time," Hopkins said.

Hopkins is adamant he did not throw anything at the Trump supporters and was NOT speeding or driving dangerously.

He even dropped this quote ... "If I was in a Ferrari speeding, I don't think you would be able to take a still picture of me."

He's got a point.

NFL superstar DeAndre Hopkins is accused of swerving in and out of a Trump caravan in his Ferrari before his game in Arizona on Sunday ... all while shooting POTUS supporters 2 middle fingers.

People who claim to be a part of the Trump rally say the scene all went down at around 1:30 PM in the Phoenix area ... just a couple hours before Hopkins' Cardinals took on the Seahawks.

One Twitter user, Richard Williams, claimed the 28-year-old receiver was driving recklessly in his pricey convertible ride amid the Trump caravan ... and accused the NFL player of straight-up putting lives "at risk."

@DeAndreHopkins My 8 yr old son was in one of the cars you were swerving in and out of as you were disrupting the PHX Trump Train drive and trying to cause an accident. You're a piece of trash. Make your political statements, but you out people at risk today. @espn @AZCardinals pic.twitter.com/7tAuuyM5Or

"My 8 yr old son was in one of the cars you were swerving in and out of as you were disrupting the PHX Trump Train drive and trying to cause an accident," Williams wrote in a scathing message to the Cards player.

"You're a piece of trash. Make your political statements, but you out people at risk today."

Several other people who claimed to witness Hopkins at the rally say they too believe Hopkins put people in danger with his actions.

"It's scary when they are coming up fast and swerving into you," April Garcia told azcentral.com.

The Cardinals have yet to comment on the allegations. Hopkins, meanwhile, has not addressed the alleged incident either.

We've reached out to DeAndre's reps for comment, but so far, no word back yet.

Hopkins -- who's advocated heavily for social justice throughout the Black Lives Matter movement this summer -- played a huge role in getting Arizona a win over Seattle, catching 10 passes for 103 yards and a TD. 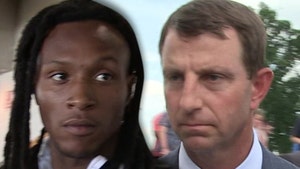 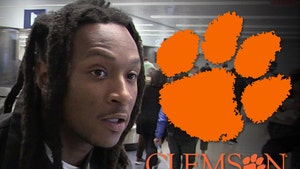