Cops in Atlanta say NFL star Hayden Hurst had his Falcons iPad jacked out of his car just a couple hours after ATL lost to Detroit on Sunday.

According to police docs, obtained by TMZ Sports, Hurst called officers at around 6 PM ET -- shortly after the Falcons took a heartbreaking 23-22 L to the Lions -- to report a theft.

In the docs, the 27-year-old tight end said he went out to his car and noticed his front passenger side window had been busted out and his black Nike book bag had been taken.

Hurst told cops the bag had some seriously valuable stuff in it ... including a Falcons iPad (listed as a "new model"), red BEATS headphones and a notebook.

Hurst -- who had parked his 2020 Chevrolet SUV at his sister's house -- said they had security cam footage of the incident ... and cops say the video captured everything.

According to the docs, cops say the footage showed a man walking up and down the street before approaching Hurst's vehicle and smashing out the window and taking the bag.

Cops added they retrieved fingerprints from the car ... and have launched an investigation.

Hurst, meanwhile, tweeted about the whole incident Sunday night ... showing a photo of his damaged car and writing, "Welcome to Atlanta! Sick thanks!!!"

Hayden -- who was traded to Atlanta from Baltimore this offseason -- has been a bright spot for the Falcons this year ... recording 25 catches for 295 yards and 3 TDs through 7 games. 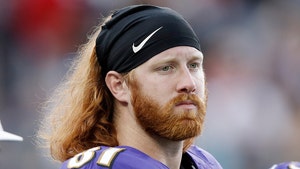