Jerry Jones clearly ain't handling the demise of the Dallas Cowboys' season well ... he just snapped at a radio host after a leadership question -- straight-up telling the guy to "shut up."

The team's owner was speaking with 105.3 "The Fan" Tuesday morning ... when one of the hosts asked him if he believes his 2-5 Cowboys have a "leadership void."

The 78-year-old rambled in his answer ... and when the host tried to clarify the question -- Jones got big mad.

Jerry later circled back at the end of the interview to apologize for getting snippy ... telling the hosts, "If I were a little abrupt there, then I really don't want to have our day start that way."

"You're too good of men for that," he said. "This certainly isn't my most tactful time, you might say, with this thing as we discuss these matters."

Jones added he's SUPER disappointed by how the Cowboys' season has played out so far ... explaining, "We haven't spent the time, the years, the money, the effort and everything for the Dallas Cowboys to be where we are right now."

If you haven't been paying attention ... the Cowboys are vying for the title of "Worst in the NFL" in 2020.

The team's defense hemorrhages points ... and with the offense losing Dak Prescott and several key offensive linemen to injury, it just can't score enough to keep up.

Jones, though, is trying to stay positive despite the clear frustration ... adding in his interview, "There will be better days." 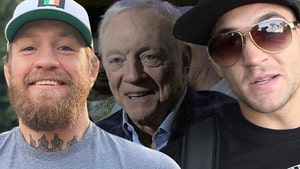