"They could do so much if they decided to use their stupendous level of popularity to fight racism."

Soccer superstar Megan Rapinoe clearly ain't happy with the efforts Lionel Messi and Cristiano Ronaldo have made to try to stamp out racism ... and now, she's urging them to do far more.

Racism is still a huge problem in international soccer -- particularly in 2019.

The two international footballers -- arguably the most popular athletes on the planet -- have in the past used their platforms to fight against racism and for equality.

Just two years ago, Ronaldo famously stood up for a Black player who fans had hurled racial insults at ... writing in an IG post, "In the world and in football there always needs to be education and respect. No to racism and to any sort of insult and discrimination!!!"

Messi, meanwhile, was part of a 2016 UEFA PSA with Ronaldo and other stars denouncing racism.

But, clearly, Rapinoe feels that ain't enough ... pushing for them to use their voices much more.

Megan went on to praise athletes like Naomi Osaka, Lewis Hamilton and LeBron James for their efforts in the battle for social justice.

"These athletes inspire me," the 35-year-old said. "There is like an invisible thread between us. We must not be shy." 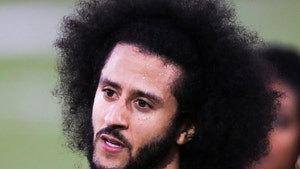