Hold the balloons and confetti -- President Trump is reportedly bagging on a planned election night shindig at his hotel in Washington D.C., and it could be a major sign ... of several things.

The event scheduled for Tuesday night at his Trump International Hotel was billed as THE Trump campaign's celebration of winning 4 more years in the White House, and POTUS would be in attendance. An email invite to the bash screamed, "It will be absolutely EPIC, and the only thing that could make it better is having YOU there." Very Trump-esque.

However, the Prez is now opting to watch the poll results pour in from the White House ... according to the New York Times.

Now, Democrats will say the Prez is running scared ... eyeing poll numbers that show him trailing anywhere from 3 to 8 percentage point. Another option could be the administration finally adhering to coronavirus concerns. Current D.C. restrictions are for no more than 50 guests at a party.

The more likely option though is the strong likelihood the election won't be decided on Tuesday night -- so, what's the point of filling a ballroom if ya can't pop champagne bottles?

We've reached out to the Trump campaign ... no word back yet. 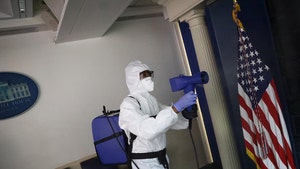