5:33 PM PT -- Yikes ... Biden's sprain just upgraded to a fracture, which will have him living the boot life for a good while.

Biden's doctor says that although initial X-rays did not show any obvious facture in his right foot, further imaging from a CT scan confirmed he'd suffered hairline fractures on his lateral and intermediate cuneiform bones ... which are in the mid-foot area.

His doc adds, "It is anticipated that he will likely require a walking boot for several weeks." Oof ...

4:00 PM PT -- Here's Joe Biden leaving his doctor's office after being preliminarily examined, and while there's no fracture or break ... it's clear he hurt himself pretty bad.

The man's walking gingerly with a slight limp. Luckily, there was a waiting car ready to pick him up and take him away. He also some handlers on hand for assistance.

3:11 PM PT -- Looks like Joe's gonna be alright after all -- his doctor says he suffered a sprain in his right foot, but that X-rays showed no obvious sign of a fracture.

President-elect Joe Biden might be limping his way into the White House -- the guy twisted his ankle this weekend playing with his dog ... and is getting checked out just in case.

Biden was injured Saturday while playing with his German Shepherd, Major. He slipped and twisted his ankle in the process. Out of an abundance of caution, his team says he'll be examined by an orthopedist Sunday afternoon.

Reporters weren't allowed to view Biden going in or out of the doctor's office, per his team's request.

First of all, ouch. Second ... the news is both awesome and somewhat scary. It's great that Biden is active and able-bodied enough to play with his dog, and apparently feisty to the point that he could actually hurt himself ... even slightly.

It'll be cool having a Prez that gets out and there and ruffs it every now and then -- unlike Trump, whose only physical activity is golf ... which is pretty static.

On the other hand, Biden is an older guy ... he's 78. A sprained ankle isn't gonna make or break anything (we hope), but maybe take it easy out there, JB. We're gonna need ya intact for at least 4 years ... so tell Major (and Champ) to cool it. 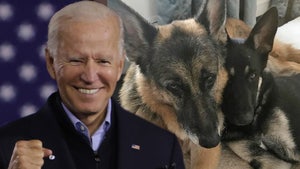