The life-size Gundam robot replica Japanese engineers have been working on for months is finally ready for its big debut ... even though it's probably Japan's worst-kept secret.

The 60-foot machine -- made to look like the OG "Mobile Suit Gundam" robot RX-78-2, from the anime show -- put extra emphasis on the mobile part of its franchise Sunday ... 'cause it's finally complete, and was very much on the move with a push of a button.

The Gundam Factory in Yokohama unleashed its Frankenstein-ish creation, showing off exactly how it's able to walk (albeit slowly) on its own ... something they were very publicly testing out back in September. Looks like RX can take a few more steps now -- which is both awesome and low-key terrifying too.

We love living out our childhoods as much as the next guy or gal, but ... unleashing the power of Gundam is just a short-circuit away from this thing getting a mind of its own and starting the robot apocalypse. That just us???

Anyway, word is this thing was made with at least 20 moving parts -- massive parts, at that -- and it supposedly weighs some 25 tons. It'll be open to paying customers in December -- when folks can climb the observation deck for a closer look.

Not only that, but they've also built an on-the-ground simulator so you can act like you're actually operating this thing from inside the cockpit of the robot's torso ... just like on TV!!! 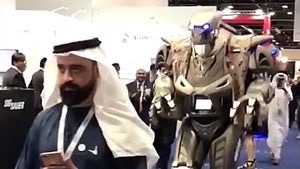