The 29-year-old forward was playing for his club Wolverhampton against Arsenal -- when he collided with Brazilian star David Luiz while going after a corner kick in the 5th minute of the game.

The two banged heads -- and it was so loud, you could hear the impact on the TV broadcast.

Medical personnel rushed on to the field to treat both men -- but it was obvious Jimenez was badly hurt ... and they called for the stretcher.

He was eventually transported to a nearby hospital -- where he was diagnosed with a fractured skull and underwent surgery.

Wolverhampton issued a statement Monday morning -- saying, "Raul is comfortable following an operation last night, which he underwent in a London hospital."

"He has our love and support as he begins a period of recovery.  We're all with you, @Raul_Jimenez9."

As for Luiz, he was bandaged up and stayed in the game.

Wolverhampton ended up winning the match 2-1. 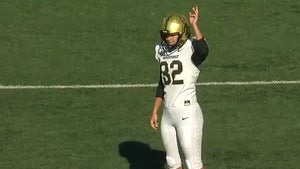