A judge has thrown out a restraining order against NBA player Trevor Ariza -- after determining he did NOT physically abuse his 12-year-old son, TMZ Sports has learned.

As we previously reported, the Oklahoma City Thunder player has been locked in a custody battle with Lana Allen, the mother of his child.

Allen had previously filed court docs saying Ariza had physically abused their child on multiple occasions dating back to 2019 -- allegations Ariza strongly denied. She obtained a temporary restraining order earlier this year and was hoping to extend it.

The case went in front of a judge who got testimony from all of the people involved -- including both parents, the child, therapists and more.

Finally, on Monday the judge issued his opinion on the case saying Ariza has not -- and does not -- pose a threat to his child. Therefore, the temporary restraining order has been dissolved and the request for a permanent one has been denied.

"The court finds that while the relationship between Ariza and [his son] is clearly strained, his son is not in any physical or emotional danger with his father."

The judge raised some concerns about Ariza's "authoritarian and aggressive" parenting style ... but found that his actions do not reach the level of domestic violence.

The judge has ordered both Trevor and Lana to come up with a parenting plan in hopes they can create a more positive environment for their son.

Lana will retain primary custody but Trevor gets significant visitation -- with the goal of building a better relationship.

Here's hoping they can work things out ... 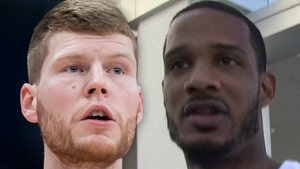 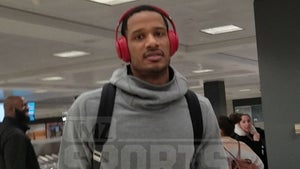 Trevor Ariza Touches Down In D.C., I Don't Know How Good Wizards Are!