Stunning revelation from Tyreek Hill ... the KC Chiefs superstar says he thought Patrick Mahomes was straight-up GARBAGE after the team drafted the QB in 2017.

"I thought he was trash," Hill said of his first impression of Mahomes at their first training camp together in KC. "I ain't gonna cap. I ain't even gonna cap."

Hill appeared to remember the moment vividly when talking about it all with the guys on Showtime's "Inside the NFL" this week ... saying he wondered out loud what his team's personnel department was doing after seeing Mahomes live for the first time.

.@cheetah admits he thought @PatrickMahomes was 🗑 the first time he saw him play in @chiefs training camp 😂

Of course, Mahomes ended up turning things around -- he's now widely considered the best quarterback of this generation -- and Hill says it's all 'cause the dude put in hard work.

Mahomes appears to be on his way to winning his second league MVP award in just his third season as a starter ... he's thrown for 3,497 yards already this year with 30 passing TDs and just 2 interceptions.

And, Hill's on his way to a career year because of it all as well -- already scoring 14 total TDs in just 11 games!!

Props to Mahomes for the epic turnaround ... but also, maybe cross Tyreek off the future general manager list after that rookie evaluation! 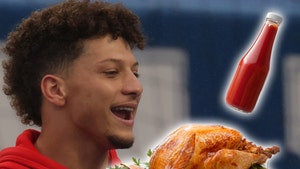