That's exactly what Kyrie Irving did Monday night ... super sneakily handing off his threads to Bam Adebayo after the Heat vs. Nets game -- and the dude got away with it this time!!

Of course, the NBA’s new COVID-19 safety protocols were created to enforce social distancing measures between players on opposing teams. This means no pre or post-game hugs. No handshakes. No jersey swaps.

On Saturday, Irving attempted to give the Heat big man his jersey after the Nets win, but security wasn’t having it -- they broke up the exchange and Irving was not allowed to give his jersey up.

Kyrie and Bam weren't allowed to exchange jerseys after the game 😂 pic.twitter.com/BKPR7FGZGr

But, the two teams met again Monday night and Irving was determined to get Adebayo his threads -- this time, he hatched a sneaky plan like he was Danny Ocean (shout out George Clooney).

Irving remained cool and crept near the Nets bench before taking off his jersey and signaling over Adebayo.

The 2 stars embraced for a split second, with Irving slyly passing over his jersey in the process.

The plan was executed without a hitch ... with Bam walking away and stuffing Kyrie's jersey in his own before casually walking into the locker room.

Let's just hope more players don't follow suit -- COVID-19 is no joke, and the NBA has already had a bunch of games postponed this season. 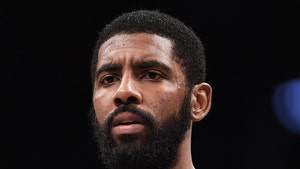 Kyrie Irving Apologizes To Fans After Nets Return, 'Happy To Be Back'