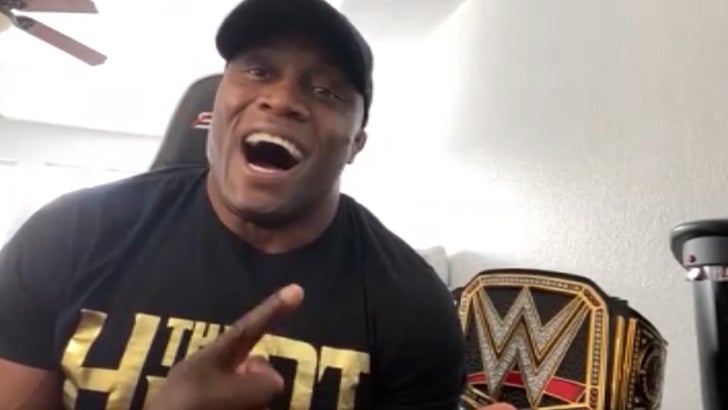 WWE Champion Bobby Lashley wants a piece of Brock Lesnar ... telling TMZ Sports he doesn't care if he doles out an ass-whooping in an MMA cage or wrestling ring!!

"I'm willing to wrestle, I'm willing to do 100-meter dash, I don't care. I love those big matchups! Brock is one of the biggest thing across the sports industry, sports world across the board," Bobby says.

"So if I can have an opportunity to fight Brock or wrestle Brock or do anything against Brock, I'm 100% in and I will be ready. That's all I gotta say about that!"

Bobby has a better record ... and more experience in the cage. He's 15-2 ... and has racked up wins in Bellator and Strikeforce, as well as other promotions. Lashley hasn't fought since October 2016.

As for Brock, he's 5-3 with 1 no contest. However, Lesnar has fought the stiffer competition ... and has wins over Randy Couture, Frank Mir and Shane Carwin. Brock also hasn't fought since 2016.

In the wrestling ring, both men are Superstars in every way. Lesnar is a 5x WWE World Champion, and Lashley is the current WWE Champion ... having recently defeated The Miz.

Bobby -- who you can catch on "Monday Night Raw," -- left us with a message for Lesnar's mouthpiece, Paul Heyman.

"Paul, call me! Before you guys always said that I had nothing or no reason for [Brock] to come after me. Now I do."