Luke Bryan's going to miss out on the excitement of "American Idol" going live for the first time this season due to the coronavirus ... but a familiar face will take his place.

The country music star and 'Idol' judge says he tested positive for COVID-19, so he won't be part of Monday night's first live show of the reality singing competition.

Luke says he's doing well and hopes to be back at it soon, but in the meantime ... Paula Abdul is back!!!

The show just announced while Bryan's quarantining and recovering at home, the former judge will be filling in as guest judge alongside Katy Perry and Lionel Richie.

It's unclear how long she'll have to hold down the fort in Luke's chair, but as you know ... she has a lot of experience. Paula joined the series in 2002 as one of 3 judges with Simon Cowell and Randy Jackson, and had numerous memorable clashes with Simon.

She left before the 9th season of 'AI' so it's been a while ... but it's gotta be like riding a bike for her. Fans will find out Monday night. 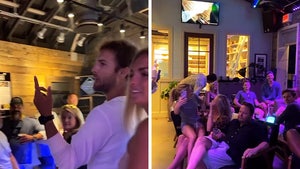