Felix Silla, who famously played the mysterious and hairy Cousin Itt on "The Addams Family," is dead after a battle with pancreatic cancer. 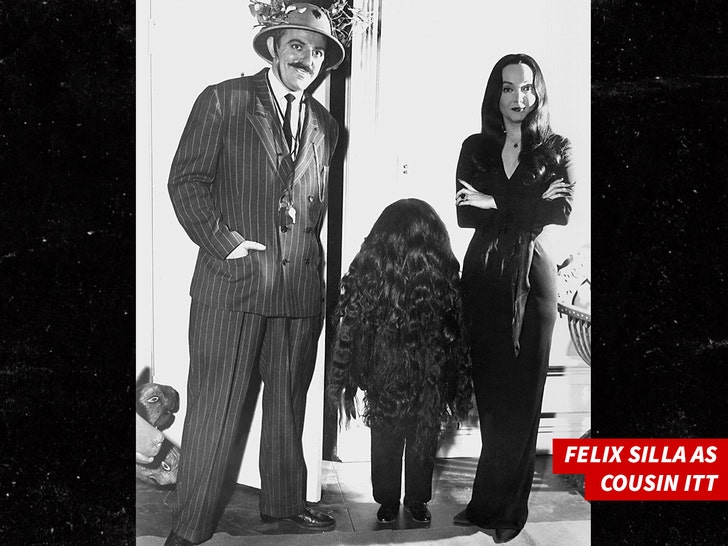 Although we never saw his face on the show ... Felix was extremely well known for playing the mumbling Cousin Itt on the 1960s sitcom. For the young 'uns... he dressed in sunglasses, a bowler hat and a hairpiece covering his entire body. The audience never understood what he was saying, but members of the Addams Family did.

Silla also didn't get any face time as Buck Rogers' robot sidekick Twiki, or as a hang-gliding Ewok in "Star Wars: Episode VI - Return of the Jedi" ... but folks knew him because he stood barely 4 feet tall and weighed about 70 pounds.

Felix did have at least one famous role where he actually showed his mug ... in 1975 he shaved his head to play the villainous Litvak in "The Maltese Falcon" sequel "The Black Bird."

Born and raised in Italy, Felix moved to the United States way back in 1955 and toured around with Ringling Bros. and Barnum & Bailey Circus, working for several years as a tumbler and trapeze artist before landing in Hollywood in 1962 as a stuntman.

Felix did stunt work on "E.T. the Extra-Terrestrial," "Batman Returns," and "Poltergeist," among other films ... and also appeared in the OG "Planet of the Apes" and "Indiana Jones and the Temple of Doom."

Silla was 84, and is survived by his wife of more than 55 years, Sue, and their children, Bonnie and Michael.