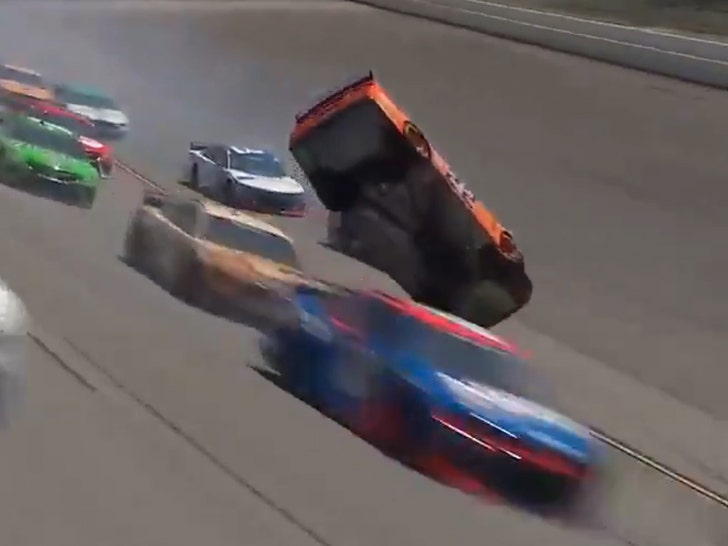 Joey Logano is thankful to be alive today ... after the NASCAR superstar was involved in a terrifying crash Sunday where his car went airborne.

The horrifying moment all went down during NASCAR's race at Talladega Speedway ... when Logano's ride was nudged while hitting triple-digit speeds.

Joey Logano gets airborne and goes for a WILD ride at Talladega! pic.twitter.com/7E9vCyqCZD

As Logano spun out, his car flipped into the air and stayed there for several seconds.

Video of the wreck is INSANE ... especially from the perspective of fellow racer Bubba Wallace, who had a camera pointed at the wild action the entire time.

Logano's car eventually crash-landed onto its roof and skidded hundreds of feet ... but the 30-year-old miraculously suffered nothing more than bumps and bruises.

During an interview just minutes after the accident, Logano said he was super grateful to have no injuries ... but implored NASCAR to make rule changes to avoid similar future wrecks.

"I'm one hit away from the same situation Ryan Newman just went through."- Joey Logano pic.twitter.com/3J9uDCc7u3

"On one hand, I am so proud to drive a Cup car that is safe -- that I can go through a crash like that and get out and speak about it," Logano said. "And one hand, I'm mad about being in the crash and the other hand I'm just happy I'm alive."

"On the other hand, I think when are we going to going to stop? Because this is dangerous doing what we are doing. I got a roll bar in my head. That is not OK. I am one hit away from the same situation Ryan Newman just went through."

You'll recall, Ryan Newman was hurt in a similar airborne crash during last year's Daytona 500 ... and required a stint at the hospital to fully recover.

"I just don't feel like that's acceptable," Logano added ... "We have to fix it ... 'Cause someone already got hurt and we're still doing it. So that's not real smart."