History was made on the NHL ice Monday night ... the Tampa Bay Lightning started an all-Black line, and it's believed to be the first time an NHL team has EVER done that.

Daniel Walcott, Gemel Smith and Mathieu Joseph -- who are all Black -- started at the center and wing spots for TB in their game against the Panthers ... and the scene was awesome.

The trio logged a ton of ice time -- all 3 dudes played over 10 minutes each in the contest -- and they were praised by the Lightning broadcast team for their efforts in the game.

"First time ever in NHL history they have started an all-Black line in this league. A big, historic moment tonight for sure."

Walcott and Smith aren't regulars on the Lightning roster -- Smith has played sparingly this season and Walcott was playing in his 1st-ever NHL game -- but Mathieu was SUPER fired up to have gotten the start with the guys nonetheless.

"Honestly, it was pretty awesome," Joseph said ... adding, "I think it’s a step in the right direction and obviously you got to thank the coaching staff for that, it was their call."

"But, it was definitely fun to have some progress and clearly it's a process over this, but seeing that, and I don’t know if it was the first, but I think it was great to see and I’m glad I was part of it."

The Lightning wasn't able to get the win -- they dropped the contest 4-0 ... though Tampa Bay coach Jon Cooper was certainly pleased with his starting group's effort.

"They deserve to be here and have worked their tails off," the coach said of the three. "To have them all together, they had a little chemistry. Moving forward in the league, you hope it isn't a story anymore and will be the norm. It was a pretty cool moment for all those guys."

Added Walcott, "Coop did something really special here to promote this for young kids." 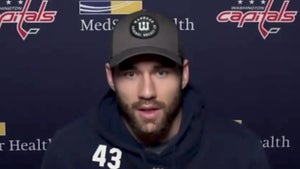 Tom Wilson Justifies Fighting Rangers, They Went After My Goalie, Jumped On My Back!