Shelby Houlihan -- arguably the USA's best female runner -- is insisting she is NOT a cheater despite a recent positive steroid test ... claiming it's all a mixup caused by a pork burrito.

The 28-year-old Olympian spelled it all out in a social media post Monday ... explaining she believes she's been wrongfully hit with a 4-year suspension due to a trip to an "authentic Mexican food truck" in Oregon several months ago.

Shelby says back on Jan. 14, the Athletics Integrity Unit informed her a sample she submitted on Dec. 15, 2020 had contained the banned substance Nandrolone.

The anabolic steroid is considered a performance enhancer, and Shelby says she was immediately suspended for having it in her system.

But, Houlihan says after she did her research ... she found the substance can wrongfully show up in tests if the person consumes pork products prior to giving out their sample.

And, Houlihan says just 10 hours before she gave her December sample ... she had gotten a pork burrito from a local stand near her house in Beaverton.

The problem for Shelby? She says despite a mountain of evidence proving the Mexican food feast was the reason for the positive test -- the World Anti-Doping Agency denied her appeal and formally hit her with a 4-year ban from competitive running last Friday.

Of course, that means Houlihan -- who owns U.S. records in the 1,500- and 5,000-meter runs -- will now be barred from competing in this summer's Tokyo Olympics.

"I feel completely devastated, lost, broken, angry, confused and betrayed by the very sport that I've loved and poured myself into just to see how good I was," Houlihan said.

"I want to be very clear. I have never taken any performance enhancing substances. And that includes that of which I am being accused," Houlihan wrote. "I believe in the sport and pushing your body to the limit just to see where the limit is. I'm not interested in cheating. I don't do this for the accolades, money, or for people to know my name. I do this because I love it. I have so much fun doing it and it's always the best part of my day."

FYI -- if this all sounds familiar, it's because it kind of is ... boxing star Canelo Alvarez famously blamed a positive test back in 2018 on tainted meat he consumed in Mexico. 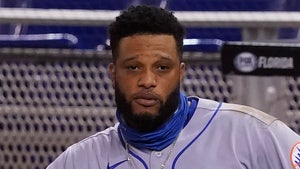