John Corbett's got a condo on the market that's been Aiden Shaw tested and Carrie Bradshaw approved.

The "Sex and the City" star has listed his WeHo condo for a cool $1,311,600. It's in the luxurious Empire West high rise building and the unit's on the seventh floor. So, talk about views.

The 1,607-square-foot condo has 1 bedroom, 2 bathrooms and plenty of space to store tons of shoes ... if you're a Carrie-in-training. It also has lots of old Hollywood charm and great views of Tinseltown.

The new owner of this condo is getting the full VIP service. The building offers round-the-clock full service ... from 24-hour valet parking and concierge to a sick gym and private tennis courts. There's also a jaw-dropping rooftop deck with a brand new swimming pool, lounge beds and breathtaking 360 views.

And, for those who wanna take a stroll in and around Hollywood, the condo's just a stone's throw away from some of the best joints WeHo has to offer.

The listing's held by Justin Alexander of Compass. 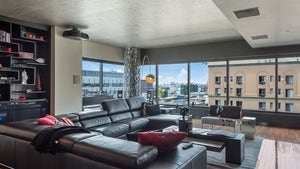