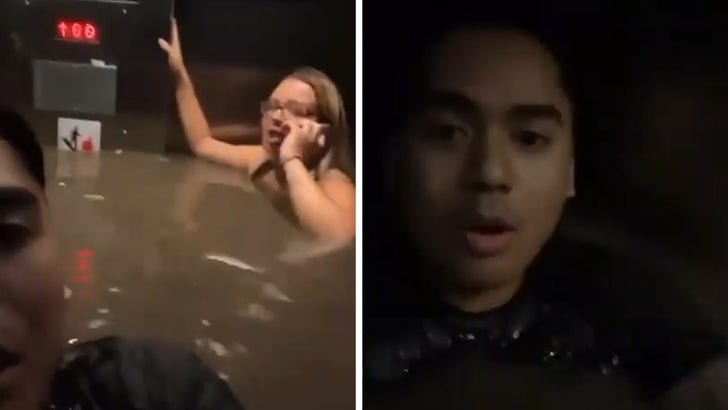 Nebraska was under a deluge of downpour over the weekend, especially in Omaha -- where three people nearly drowned in an elevator that was completely full of water.

Local resident Tony Luu captured the terrifying moment on his social media, showing himself and two pals trapped in an elevator from their apartment building ... where they ended up neck-deep in H2O while trying to descend and get a closer look at the madness outside.

Understandable that they'd want to see the wild flooding first-hand -- it was quite a scene all over Omaha, it appears ... with water elevating rapidly in parking structures and elsewhere.

Check it out ... Luu was able to record the moment that the elevator got stuck, and when water started to pour in through the vents. He told local outlets the water quickly reached their stomachs, at which point he and his friends started to get freaked out.

As the water rose to frightening levels -- nearly reaching the ceiling of the tight space -- Luu and his friends hoisted themselves onto the elevator railing to get leverage ... and phoned 911 for help, as well as other friends of theirs -- including the building maintenance man.

Eventually, Luu's other friends from outside were able to pry the doors open from the lobby level ... and Luu says he was literally swimming out as the water came rushing out. Not to make light of this, but it almost sounds like the elevator scene from 'The Shining.' Freaky ...

Anyway, all three of them were fortunately uninjured in the end. Still, though, it could've easily turned into a deadly situation if not for some quick thinking and on-the-spot heroics.

Stay safe out there, everyone.